The Shinkansen (新幹線, new trunk line) is a network of high-speed railway lines in Japan operated by four Japan Railways Group companies. Starting with the Tōkaidō Shinkansen (515.4 km, 320.3 mi) in 1964, the network has expanded to currently consist of 2,615.7 km (1,625.3 mi) of lines with maximum speeds of 240-320 km/h (150-200 mph), 283.5 km (176.2 mi) of Mini-shinkansen lines with a maximum speed of 130 km/h (80 mph), and 10.3 km (6.4 mi) of spur lines with Shinkansen services. The network presently links most major cities on the islands of Honshu and Kyushu, with services along the newly constructed extension to the northern island of Hokkaido scheduled to commence in March 2016. The nickname bullet train is sometimes used in English for these high-speed trains.

The original Tōkaidō Shinkansen, connecting the largest cities of Tokyo and Osaka, is the world's busiest high-speed rail line. Carrying 151 million passengers per year (March 2008), and at over 5 billion total passengers it has transported more passengers than any other high-speed line in the world. The service on the line operates much larger trains and at higher frequency than most other high speed lines in the world. At peak times, the line carries up to thirteen trains per hour in each direction with sixteen cars each (1,323-seat capacity and occasionally additional standing passengers) with a minimum headway of three minutes between trains.

Though largely a long-distance transport system, the Shinkansen also serves commuters who travel to work in metropolitan areas from outlying cities one or two stops removed from the main cities, and there are some services dedicated to this market.

Japan's Shinkansen network had the highest annual passenger ridership (a maximum of 353 million in 2007) of any high-speed rail network until 2011, when China's high-speed rail network surpassed it at 370 million passengers annually, though the total cumulative passengers, at over 10 billion, is still larger. While the network has been expanding this additional ridership is expected to be overtaken by Japan's declining population causing ridership to decline over time. The recent expansion in tourism has also boosted ridership marginally.

What a speed! A train in Japan has set a world record. The train drove more than 600 kilometers per hour. 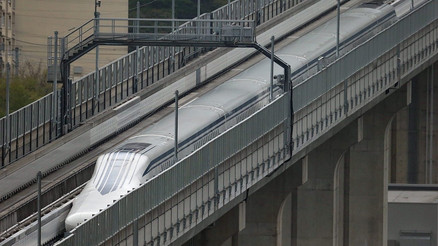 Never before had reached such a speed a train. It was the first time that a train with more than 600 kilometers per hour was out. Dangers was the pace on a test track, because even taking "Maglev" no traveler with.

"Maglev" is a maglev train. Such a train does not run on rails but hovers using magnets on the track. It will take some years until fast train brings people from one place to another. In 2027 he will link Japan's capital with the industrial city of Nagoya. Then people should be able to drive between cities and fro. If future once people are on board, the train carrying about 500 kilometers per hour to be on the road. For comparison: This is allowed to drive a car with us in the city ten times faster.

It is planned that the train can drive up to 2045 and to the city of Osaka. The routes for the trains still need to be built. Many tunnels are created. The company that wants to bring the train to the track, must spend on it a lot of money. She expects that there will be 66 billion euros, which come together.